The mission is to bring American Burger directly to the audience and make the film available all over the world – in all platforms.

American Burger is a happy horror comedy written and directed by first-time filmmakers Bonita Drake & Johan Bromander. The directors bring a busload of American students on a culture trip in Europe. In the middle of nowhere they stumble upon a mysterious Hamburger stand and are about to realize that European notion of American Hamburgers is terrifyingly different to what they’re used to…

The global day-and-date release is planned for late autumn this year, the exact date to be released soon. American Burger will be available as original English language version with subtitling in several different languages.

“We believe the time is right for a distribution that is adjusted to the wishes and demands of the film lovers out there. The audience is a powerful driving force and we strongly believe that this model will accommodate their wish and proof it’s the way to go in future distribution.” (Producer Anna G Magnusdottir, LittleBig Productions)

“Having followed the distribution of Iron Sky, another fan-driven, Internet-active film, I’m bound to believe that a day-and-date release for such films, like American Burger, where worldwide Internet audience can have an access to the film as soon as possible in the best possible quality, without the hindrance of DRM, is the best strategy.” (Timo
Vuorensola, Iron Sky)

“Global release is such an exciting thing. For us as directors a Global event and meeting the audience directly is a dream come true. It’s like saying, “Here you go World, have
some American Burger! Enjoy!” (Directors Bonita Drake & Johan Bromander) 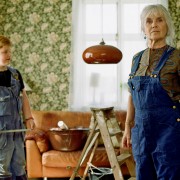 American Burger to Bucheon & 2015 BiFan
Video Interview with Cesar Galindo, Director of Gringa American Burger Official Trailer
Movieboosters.com uses cookies for statistical analysis, for improving the user-friendliness of
the website and for engaging with social media. By visiting our website, you consent to our
use of cookies as described in our privacy policy.